con4PAS has become the AudioCodes Channel Partner with the certification: 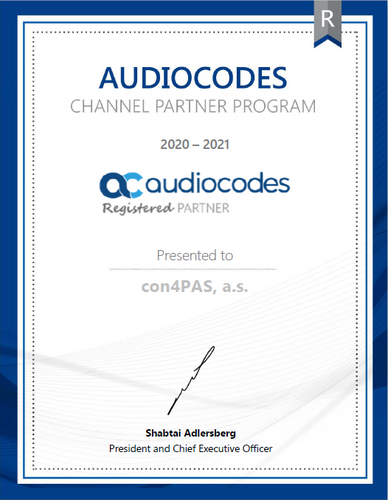 Sinch AB, global leader in cloud communication solutions and SAP SE (NYSE: SAP) entered into an agreement on the sale of the SAP Digital Interconnect (SDI) communication platform. The SDI platform offers cloud communication products and serves over 1,500 corporate customers all around the world. This transaction also includes the SAP Contact Center (SAP CCtr) solution in two variants – both on-premise and cloud.

Please note that the following article is not based on an official SAP communication but rather on our experience and it expresses the author’s opinion.

Last year, SAP released information on the sale of the SDI platform to the Swedish company Sinch for EUR 225 million on its website at SAP News Center. The SDI platform also includes the contact center solution (CCtr), although it never belonged to this product family in terms of technology and focus. In this article, we will summarise the impact on the customers using the on-premise version of CCtr.

SAP sold the contact center including the entire SAP Labs development team located in Finland. However, generally speaking, SAP guarantees the same level of support until the end of 2025 (for more information, see the Product Availability Matrix (PAM) portal – login requires the S-User ID). Based on our experience, we know that part of SAP OSS support staff remains in SAP and continues to deal with customer incidents in the same scope as before.

The guaranteed support applies not only to the product itself, but also to its integration with other SAP products, such as:

This changes nothing in terms the existing contracts; additional licences can also be purchased. Whether SAP and Sinch will offer the existing customers to transfer their support agreements to Sinch in financially neutral terms is the subject of debate.

However, the situation for new customers is different – for the time being, SAP has withdrawn the CCtr solution from its offer and the sale of licences under Sinch is being prepared. The sales model will probably be the same as under SAP (i.e., name-based licences and year-long maintenance); however, Sinch can be expected to also offer an alternative model based on numbers of contacts. Sinch also operates the same product in a cloud version, with a subscription metric based exclusively on the number of contacts per month.

Similarly, a partner ecosystem is only now being prepared – CCtr in both versions (on-premise and cloud) will be available both directly from Sinch and through partners such as con4PAS.

To appreciate the contact center’s position and future, one should understand why SAP sold its SDI group for EUR 225 million. Although the group was profitable, SAP probably intended to become global leader in the field of cloud communication APIs (for WhatsApp, SMS, Facebook, etc.) – and the growth dynamic did not correspond to that objective. Sinch has had the same products in the area of APIs as SAP and – as estimated by Hoger Mueller of Constellation Research in the following article – Sinch has purchased the customer base from SAP, not the APIs themselves. As a matter of fact, this was revealed at the end of last year when Sinch terminated support for SDI API and began migrating the existing customers to its own Sinch API.

The only exception is CCtr – Sinch previously did not have such a product and it receives a lot of attention. Since almost the first day after acquisition, Sinch began acquiring new customers and implemented the very first Sinch CCtr Cloud including Sinch virtual telephone services in co-operation with con4PAS.

From where we stand, it seems that the CCtr development team has been given a bit more freedom and reacts more flexibly, which is a welcome development.

What are the risks for existing SAP customers?

As mentioned above, SAP has not changed its support in terms of contractual guarantees and in our experience, it continues to support the product, where Sinch provides it with hotfixes and L3 support. We assume that a new FP17 version will be available to SAP customers, which Sinch will probably release in a month.

In the long term, Sinch might develop new functionalities that will be licensed separately, but there have been no such plans to date. On the other hand, in a newer version, customers will get new functionalities such as predictive dialer of outgoing campaigns, which is usually a separately licensed item in some competing products.

As a partner, we are in close contact with the Sinch team and often discuss the impact of the acquisition on our customers.

In today’s dynamically changing times influenced by the ongoing pandemic, it is difficult to try and predict future developments. However, following the situation on the market in virtual communication technologies, we consider the transfer of the contact centre to Sinch solutions portfolio as a pragmatic step. We anticipate a positive impact on further development of functionalities, as well as making deployment possible even beyond the SAP world through expanding native integration options.

Sinch personal engagement tools help to bring people and enterprises closer together. The leading cloud communications platform developed by Sinch enables companies to connect with each mobile phone on the planet in a few seconds via text messages, voice and video. Sinch is a trustworthy software provider to mobile network operators and many of the world’s largest companies use the platform to manage their key business communication. Sinch has been a profitable and fast-growing company since its foundation in 2008. Its headquarters are situated in Stockholm, Sweden, and the company operates in over 40 countries. Its shares are listed on NASDAQ Stockholm, XSTO: SINCH. For more information, go to www.sinch.com.

Read more about the solutions in Customer Management line of business and their respective success stories.